FIQ organized the closing event of the "Young Ambassadors" project 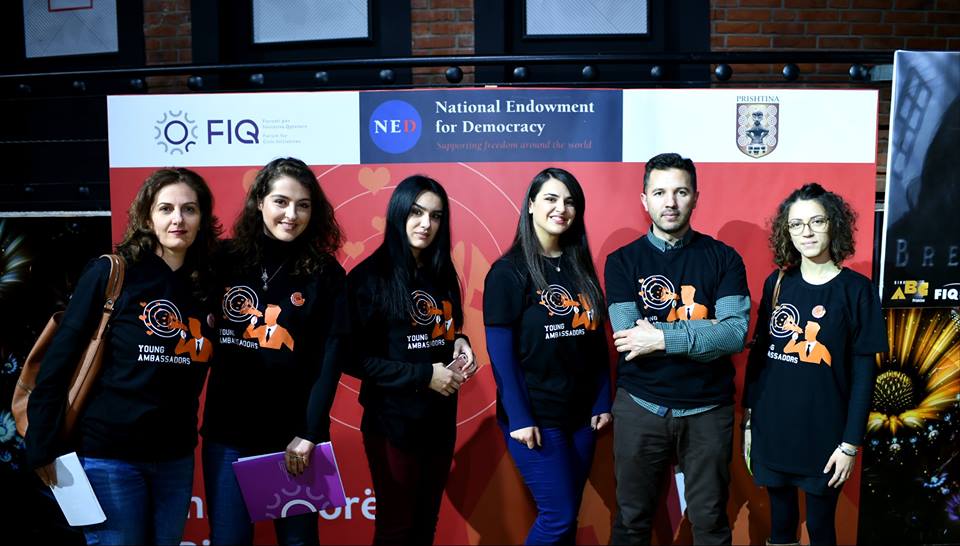 Forum for Civic Initiatives organized the closing event of the "Young Ambassadors" project. The event was organized with participation of more than 200 young people from across Kosovo, representatives of the informal youth groups and volunteers, the Mayor of Prishtina, Mr. Shpend Ahmeti, and Directors for Youth from municipality of Peja, Mr. Englebert Zefaj and municipality of Mitrovica, Mr. Fidan Ahmeti.

On this occasion, the Executive Director of the Forum for Civic Initiatives, Ms. Dajana Berisha thanked the young ambassadors, representatives of municipalities and the main project donor, National Endowment for Democracy (NED), for their dedication and support towards the successful completion of the projects.

"We live in a time when we are witness to major collective exclusions across the world;  FIQ is here precisely to prevent these phenomena by promoting cultural, ethnic, gender and  religious diversity" said Berisha.

The aim of the "Young Ambassadors" project is to promote and strengthen youth activism. This project has been implemented in four pilot municipalities: Prishtina, Peja, South and North Mitrovica, where 16 selected ambassadors identified the best ideas presented by informal groups of young people and in collaboration with FIQ provided the support to turn these ideas into concrete projects, in fields as diverse as  tourism, culture, security, energy efficiency and social innovation.

"We are very proud that we have implemented  this project. The supported given to us during the whole process  is a huge boost  to continue to work for our communities," said Besnik Hoti, a young ambassador from Mitrovica, who described the results of the project  "Sit-do not stand," whose aim was to provide sitting benches in public spaces in this city.

"We saw a great interest of young people to get involved in community projects. So it is obvious that when there is encouragement, desire and support to listen to and to include the young people, there is no lack of willingness to act?, said FIQ volunteer Florent Kastrati.

FIQ plans to expand the Young Ambassadors platform in other Kosovo municipalities during 2017; the event served as a forum during which young people had the opportunity to receive more information on how to become part of this project in the future.