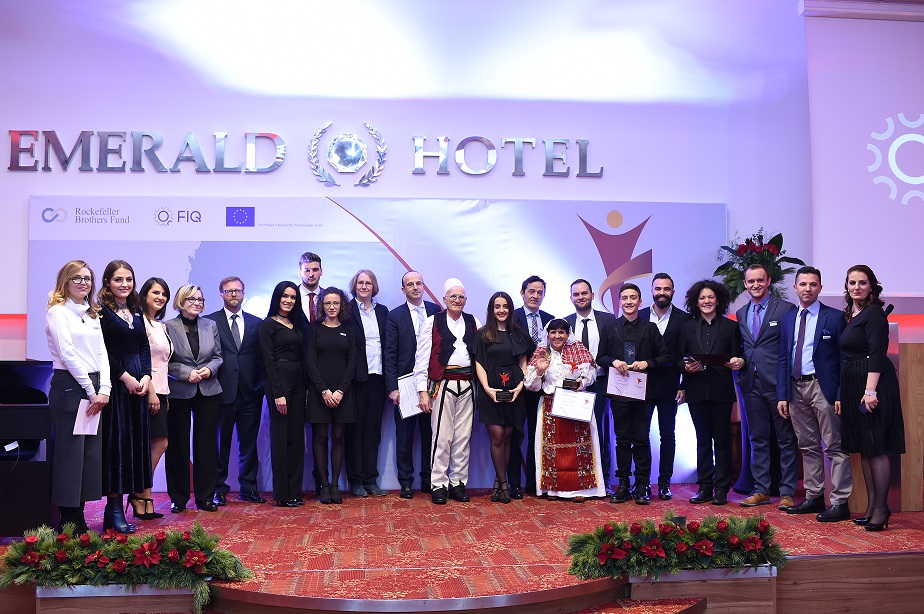 Prishtina, 07 December 2016- Forum for Civic Initiatives-FIQ-organized the traditional grant award ceremony, FIDES, which is held to honor the philanthropic contributions of individuals, organizations, and businesses in Kosovo, which systematically and with sensitivity to the environment, culture and traditional values, supported activities and projects of common interest.

The evening was organized with the participation of over 300 representatives of the community, local businesses, institutions, as well as personalities from the fields of art, culture and media. The participants were welcomed by the hosts of the event, Mr. Haki Abazi, Director at Rockefeller Brothers Fund, and Ms. Dajana Berisha, Executive Director at FIQ, as well as by the Deputy Chief of Mission at the German Embassy in Prishtina, Ms. Christina Gehlsen, Kosovo  Ombudsman, Mr. Hilmi Jashari, renown theater and stage actress Ms. Safete Rugova and the renown producer Mr. Eshref Durmishi, who all highlighted the essential role of philanthropy in addressing the most sensitive issues of the community, mobilizing citizens to help each other and supporting inclusion of all citizens to bring change. They also highlighted the importance of recognizing these contributions to inspire future generations. The winners said that FIDES awards in addition to conveying gratitude and recognition  for their  contribution also convey support, confidence and inspiration to continue their work for the common good

Categories and winners of FIDES 2016 are:

1. FIDES award for contribution at national level? ?Hasan Prishtina?-was given to:

Girls Coding Kosova  is an NGO that aims to help girls to use their potential  to create a market open to all. Girls Coding Kosovo was able to change the statistics which recorded a large discrepancy between men and boys on one side and girls and women  on the other side, in the IT sector in Kosovo. With about 600 members, Girls Coding Kosovo intends to continue to provide training, contributing to the overall social good.  The national award was given to the NGO specifically for development of the application: ?EC shlirë ", which allows all women to report sexual harassment, a phenomenon which is highly present in our country. The data collected from this application will be used by government officials to fight sexual harassment.

On  behalf of FIQ this ward was presented to Girls Coding Kosova by Mr. Haki Abazi.

2.     FIDES award for contribution at community level was given to:

BONEVET is a non-profit community center where people gather to share resources and knowledge, and to work on projects, with the aim of creating and constructing together. BONEVET space is the space for  development of art, community and educational programs that allows its members? to design, and create prototypes and works which can not be realized with the resources available to individuals working alone. The award for contribution at community level was given to Bonevet for the creation of the  innovative class " Klasë Krijuese BONEVET? in primary schools, starting with a pilot project in the primary school " Kelmend Rizvanolli " in Gjakova. Through this project, all young people studying here, will have the opportunity to attend classes that will be held in the "creative classes", and will be prepared to learn how to create unique patterns related to technology, electronics, robotics and programming with their hands.

On  behalf of FIQ this ward was presented to Bonevet by Mr. Hilmi Jashari

3.     FIDES award for individual contribution was given to:

Mrs. Marta Prekpalaj received this award as a distinguished activist who for many years contributed to the education of women in rural areas, helping them to attain their economic independence, and to preserve and develop the culture of Has. In addition, she has initiated projects aimed at the development of rural tourism and improvement of life conditions in rural zones for the benefit of residents of this area. One of her most important contributions is aid given to women of Krusha e Vogël, who were evacuated from dangerous areas. In addition, Ms. Prekpalaj voluntarily engaged to mobilize the Diaspora of Has to invest in road construction, in an amount of 700,000 Euros, a project the implementation of which provided better access to transportation for residents of this zone.

On  behalf of FIQ this award was presented to Ms. Prekpalaj by Ms. Safete Rogova.

4. FIDES award for contribution from Diaspora was given to:

This organization has given an extraordinary contribution in many areas, which are a priority for the development of the country. Firstly it has contributed to the education of young girls, whose families as a result of poor social conditions (ie. families living on social assistance) have not been  able to cover the costs of their schooling (the organization contributed with scholarships in amount of 120.000 euros) Secondly it provided support to small businesses run by women, with the aim of supporting the  production and export of domestic products (15 businesses were supported). Thirdly it promoted the history and culture through the support of the Exhibition of  the Jashari family in Hamburg and Düsseldorf.- (5000 euro).

On  behalf of FIQ this award was presented to the Union by Ms. Christina Gehlsen.

These two young artists earned the  special FIDES award for their contribution in  the promotion of Kosovo talents in the world of Art / Film, touching the scene of the most prestigious international film ceremony, the Oscars.